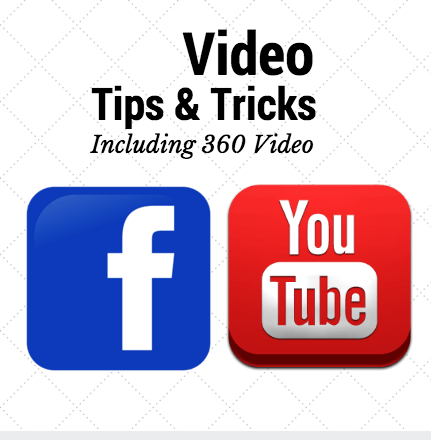 So what is the best in 2016 for video?… Youtube or Facebook? You will have to decide on your own depending on your purpose and audience. Read on for some tips and tricks on downloading, engagement examples and 360 video.

Youtube videos have been a passion of for a number of years engaging in relationships and technology strategy for success and safety. BMX, Graffiti, Crime Stoppers, SMILE Conference, Police, and whatever else that presented an opportunity for a video or a live stream has attracted my attention. Tried to count one day and realized that over 5,000 videos were in one way or another on youtube that my long list of broken cameras once had a lens on!

It all comes down to content being king. It doesn’t matter what platform you are on..if you are posting content that people want to see the people will come to where the video is posted if they want to see it!

Many people I collaborate with on social media are interested in ‘pushing’ a video. Once upon a time I was all about youtube and youtube only! Safe to say I am still all about youtube, but very much are seeing benefits on engaging video natively on Facebook.

You will benefit from engagement on both platforms.

If the video is on youtube and you need to download it in order to upload to facebook, simply add ss after the www. and download the video. Watch video below how to do this:

If you are required to created content that needs to be transcribed, Youtube has a great transcription service built right in that works best if a human being is doing the transcription. The auto transcript feature does not do a very great job! Click here for an official Google/Youtube step by step guide

If you need to transcribe a facebook video, there are a few services out there, most of which will cost you money. It is much easier just to post a link to the youtube video in your facebook post stating that if you want to view the transcribed version to view it on youtube.

Of note in this discussion is “360 Video”. They seen to be more easily viewed on facebook than youtube because you can put your fingers on the screen of your mobile device and move the video around. Click here to learn about what 360 video is

Heather and Mark: a 360 Video of Homelessness In Toronto

* this is a 360 video. On desktop you can change the perspective with a mouse. On mobile you can use a finger or move your device around. Heather has cancer. When she found out she started to use drugs and quickly became addicted to crack cocaine. Soon afterwards she lost her children and the apartment they were living in. Heather currently is in a rehab program and has some sobriety, but it is really hard to stay sober while experiencing homelessness. Mark is 39 and has lived on the streets off and on since he was 10 years-old. He is disabled and can't work. While we were talking I could see he was shaking from the cold. No one should be living outside, especially in cold weather. Together they panhandle to get a hotel room each night. But not for them. Heather will do whatever it takes to get her dog "Lucky" inside. Heather shares about criminalization, which is growing in U.S. and Canada. She explains how they get tickets for being homelessness and do not have the money to pay the fines. Ironically, a few years ago I met Billy just a few blocks away who shared a similar story http://invisiblepeople.tv/blog/2011/09/billy-homeless-panhandling-toronto-canada/

In conclusion, wherever your target audience is you should post video to that site. If you don’t know where your audience is or some are on youtube and some on facebook, it is best to post the same video natively to both youtube and facebook. As far as transcribing..Youtube transcription is free, easy and works well, but don’t do it on auto pilot, have someone actually transcribe it. At this point, unless I am missing something, I would just post a link in the facebook post of the video to watch it on youtube if you want a transcribed version.

This is all written here from experiential learning, much of which comes from volunteer work ‘just doing it’ on social media. Special thanks to Mark Horvath of Invisible People, who is always taking social for good one step further!