Investigating A ‘Tweet Suicide’: Real Life Story of Commuinty & Cops Helping To Save A Life #MentalHealth

Responding in a timely way to suicidal social media posts can save lives. Are the proper investments and training in place in 2015? An involved cop wants to further the dialogue! 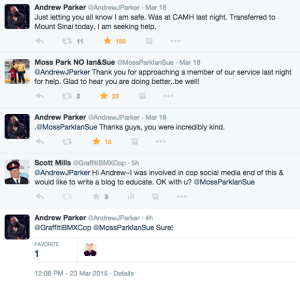 The balance between privacy and safety is often a challenge when talking about mental health issues. Social media adds another layer of complication for privacy advocates. Bottom line for Constable Scott Mills is that human resources, funding and training need to be invested in profession suicide intervention and prevention using social media tools and the dialogue needs to occur. Thanks Andrew for agreeing to let me do this blog post!

This post will describe the community and Toronto Police response to a cry for help in social media, in particular on twitter. It is being written because ‘we’, the community and the police, as well as other stakeholders like paramedics and the health system, social services and the education system need to talk about it to ensure best practices moving forward. The permission to write these facts comes from a man named Andrew Parker himself. The permission was obtained on twitter in a public forum on the tweet embedded below on Monday March 23, 2015. The ‘incident’ occurred on St Patrick’s Day, March 17, 2015.

The tipping point for me was a conversation that I had today with the Toronto Police Operations Centre police officers staff about the need for full documentation and integrated action on situations like this, as well as the fact that I noticed our Neighbourhood Officers in 51 Division who use twitter were actually tweeting with Andrew and good relations were happening! Isn’t this so much better that getting in a violent confrontation between a person in crisis and the police???

@AndrewJParker Thank you for approaching a member of our service last night for help. Glad to hear you are doing better..be well!

Just letting you all know I am safe. Was at CAMH last night. Transferred to Mount Sinai today. I am seeking help.

In the past, a call for a suicide would be treated with the utmost of confidentiality, as it should be. With the evolution of social media, I have been involved in numerous incidents of social media posts from people reaching out asking for help with their mental health, sometimes going as far as threatening suicide. These incidents are often brought to my attention by concerned friends, family or complete strangers who see the posts in social media, are concerned and wish to get the person posting the messages the professional help that they require.

I have long advocated that there is a need for a Mobile Crisis Intervention Team presence in social media — Nurse/Police Teams that are specially trained to deal with mental health calls for service in the least obtrusive way possible. In fact, I have been involved in a number of interventions as a cop informally working collaboratively with a nurse in social media. Some specific details of those interventions can be referenced on the website, which I operate, called RealTimeCrisis.org.

I strongly believe that we can effectively reduce the need to dispatch the police or ambulance to deal with a mental health issue by maintaining a presence on social media that is monitored and staffed by nurse, social workers and cops. Nine times out of ten the people reaching out simply want a professional to talk with, and dispatching police and/or ambulance, especially police, to their home or work or where they happen to be perpetuates stigma of mental health issues and sometimes results in unnecessary violent confrontations with police officers. In addition, such things as social media suicide hoaxes could be identified quickly and efficiently without wasting precious law enforcement resources, often in multiple jurisdictions around the world

I want to demonstrate with this post a few things in particular:

1. There is a tremendous public outpouring of support and willingness to help for people posting cries for help in social media

2. What was once a very private matter of threaten suicide becomes very public when the cry for help is posted on social media

3. Many people do not know what to do when they see a suicidal post on social media – friends, family, colleagues and responding police and ambulance

4. The police are not necessarily needed to be in the vast majority of cases. The exception is where an exigent circumstances IP address trace needs to occur with the social media service provider to physically locate the person needing help. This is the case about 10% of the time (unofficial)

5. The issue of legal liability and who does what and where is huge and needs to be sorted out

6. In this case a very positive relationship occurred between the person posting a suicide threat and the police. I believe that this can happen in a number of cases, in fact the vast majority of cases, which will tremendously help improve the reputation of the police as being negative in our response to people experiencing mental health issues.

7. In the Canadian Journalism Forum on Violence And Trauma’s 2014 Mindset Guide – Reporting On Mental Health,  there are great resources about how to talk about suicide in public, but there is very little touching on the phenomenon of suicidal social media posts.

8. In the Independent Review of Lethal Use of Force by Toronto Police Service by Retired Supreme Court Justice Frank Iaboucci, there is no mention of social media interventions. Perhaps this is something that can be looked into, and resources allocated in a multi disciplinary fashion to improve service delivery for those people using social media to post mental health issues.

Here is the case example of Andrew as discussed at the top of this post.

I was off duty at the time, around the supper hour on St Patrick’s Day, 2015 looking after my 2yr old son. I saw a tweet and a facebook post come to me on my smart phone from JC Lam, a Toronto teacher with whom I am friends. She alerted me to the twitter account of Andrew posting about threatenting suicide.

@AndrewJParker Do know that people care. When given a chance to do good for others, people step up. This is why this Twitter feed is growing

Other community members reached out to the complainant, who assured them that the police were on it (due to good relations complainant had with Toronto Police social media police officers)

@Badger_Janzen Toronto police are on it. I tweeted them. They let me know they are following up on it. They take these things seriously.

Andrew finally tweeted that he was getting help and the complainant re-tweeted it as did hundreds of others, and a lot of dialogue followed in twitter in public view:

I was in tears all day. I am moved to them even more now. Too many things to respond to. Am seeking help shortly.

@AndrewJParker Hey Andrew. I don't know you but I'm so relieved to see this tweet. My stomach has been in knots since I saw your posts.

I followed our procedure and captured the tweet, immediately sending it to the Toronto Police Service Communications Supervisor and following up my e-mail to them with a phone call. They sent it to the Toronto Police Service Operations Centre who worked on this from an investigative point of view. It is my understanding that some records checks on Andrew’s name and possibly a call from a third party giving a possible address resulted in a well being check being done that was unsuccessful in locating Andrew.

During this time, a Toronto Star reporter Corey Mintz tweeted that if anyone saw Andrew to do something to help him. Corey Mintz tagged the Canadian News And Government Head for Twitter Canada, Steve Ladurantaye on the tweet as well as the @TorontoPolice twitter account (me!).

Steve and I have had meetings in the past about Real Time Crisis and trying to make the concept bigger and better and for all of social media for all of the world. Steve took particular interest in this case because he was now tagged in a post by the Toronto Star reporter. This was the first time he was tagged in one of these incidents. My words to Steve were ‘Welcome to my world’, as I regularly get tagged on my individual professional accounts “GRAFFITIBMXCOP’ and on our official TORONTOPOLICE accounts.

As time went on  Andrew started tweeting again stating that he was going to get help, much to the relief of the twitter community. (see above tweet embedded under the complainant’s story)

The end of the story occurred for Toronto Police when Andrew presented himself to a Parking Enforcement Officer on the street in downtown Toronto a few hours after the initial tweets. A patrol officer was dispatched, eventually taking Andrew to hospital to get help.

There is a need for:

1. Efficient and timely flow of information between people calling in to 911 (potentially from around the world!) and the police in real life and on social media

2. Ideally, Andrew needs a nurse and medical help, not the police! So expansion of Nurse/Poice MCIT resources to social media and 24/7 is a noble goal for service delivery.

3. There needs to be a seamless way to report all of this action that is happening in public view and behind the scenes in private by police and response agencies so that all know that the person needing help is getting help, and the help is getting to the person in a timely manner.

4. Obviously privacy needs to be of utmost concern for the vast majority of these cases! (thanks Andrew for giving permission to write this blog to get the word out!)

So… let’s talk… My cell is 647-449-2801 and anyone who is willing to help achieve some of these goals! Together we can make a difference!