440 New Bed Kits For Sleeping Children Around The World @SCAW100 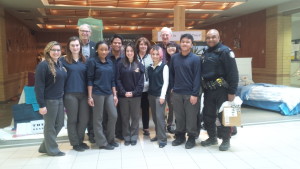 440 new bedkits are donated thanks to Marshall McLuhan Catholic Secondary School students in Toronto, Ontario Canada raising #15,420 for Sleeping Children Around The World.

Sleeping Children Around the World (SCAW) donations provide bedkits to children of any race and/or religion who will benefit the most; typically being located in underdeveloped and developing countries.

No portion of a bedkit donation is spent on administration — 100% reaches a needy child. Each *$35 donation (Canadian funds) provides a bedkit that consists of a mat or mattress, pillow, sheet, blanket, mosquito net (if applicable), clothes outfit, and school supplies. Bedkit contents vary from country to country depending upon local needs.

Since its founding by Murray and Margaret Dryden in 1970, SCAW has raised over $23 million to provide bedkits for children in 33 countries. In 2009 we reached our millionth child.

Every child is photographed with the bedkit, showing the donor’s name/country (or special occasion message) on a label.

Each photograph is then mailed back to the original donor, providing a timeless way for the donor to remember the child who so greatly benefited from their generosity.