Thank you to Mark Horvath of InvisiblePeople.tv for inspiring this work.

Toronto crisis team turns to social media to save lives. 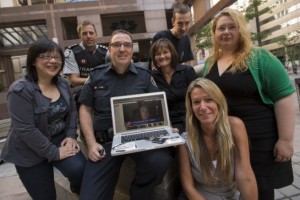 Photo For Online Story On #RealTimeCrisis @RealTimeCrisis Intervention To Save And Improve Lives In Toronto Star Monday August 26, 2013 Edition | photo by Rick Madodnik

“Can I help?”
Those three words can save lives.
In fact, they are the very words that Anne Marie Batten — a Toronto street nurse involved in an innovative suicide intervention strategy — sends out over and over via Twitter as she talks down people in distress, some on the verge of taking their lives.

For the past 18 months, Batten and Toronto police Const. Scott Mills have been working on a fledgling non-profit organization to help the mentally ill 24 hours a day on social media. They’ve dubbed it Real Time Crisis.
“We’d rather not shoot somebody that’s in crisis,” said Mills.

His employer, the Toronto police force, has come under intense scrutiny in recent weeks over how its officers deal with the emotionally disturbed after one of them fatally shot 18-year-old Sammy Yatim on a streetcar in late July. The officer has since been charged with second-degree murder.

Batten and Mills say there has been a staggering increase in digital cry-outs as more and more people use social media. People going through a crisis will tweet suicidal intentions. Friends will notice it and pass on their worries to the Toronto police.

In many instances, the police contact Batten, who tries to engage the troubled person, often with a public tweet. She then switches over to Twitter’s direct message function, which is private, and from there the assessment begins.

“When you’re talking with someone on social media, it’s unbelievable how open people will be,” Batten said. “They feel safer online.”
Most, she said, just need someone to listen as they get their troubles off their chest.

But Batten looks for cues and gathers personal information, such as the location of the person at the other end, in case she must loop the police back in if the crisis cannot be talked through digitally.

After Batten successfully calms a person down, she then puts them in touch with local resources and keeps up a relationship, following up digitally.
She finds the people she helps are generally those who’d rather communicate online or by smartphone than turn to such traditional means as phone-in crisis centres or personal sessions with a mental health professional.

Mills and Batten began discussing intervention via social media after the success they had with Real Leclair, a man nicknamed Homeless Joe suffering from paranoid schizophrenia.

Three years ago, during the tense G20 summit weekend in downtown Toronto, Joe threatened to kill several police officers. Mills recognized that the confrontation involved mental illness; he talked Leclair down and took him for coffee. It was through this that Mills got in contact with Batten via Twitter.

The two helped Leclair navigate the complicated mental health system. He is now on medication and has an apartment.
Mills knows police need mental health professionals’ assistance in these situations.

“Police intervention has to be the last resort — because in many cases that makes the situation much worse,” he said.

That sentiment was echoed by the Canadian Association of Chiefs of Police at a conference in Winnipeg last Wednesday.
“Police should not be the front line on mental health issues,” said Vancouver police chief Jim Chu, the association president. “We need to shift from a point of crisis to preventing the crisis from occurring in the first place.”

Toronto police are intrigued by the work carried out by Mills and Batten, as are other bodies, among them GO Transit, the Toronto District School Board and Google.

“As the prevalence of social media grows, these issues are going to grow and there needs to be a co-ordinated effort to respond in a way that gets the best response possible for the person in need, whether it be a response from police, mental health, community agency or all of the above,” Meaghan Gray, issues manager with the Toronto Police Service.
“Real Time Crisis will bring these resources together in a way that will make them accessible to not just the service partners but, more importantly, to the community.”

Batten and Mills have secured a spot at The Gatehouse, a renovated building on the grounds of the long-closed Lakeshore Psychiatric Hospital, where they can set up their crisis centre. They envision a bank of computers and smart phones and a team communicating in cyberspace with those in crisis.

“We’re there in real time with someone on the edge of the railway tracks,” Batten said. “And no one else is doing that.”