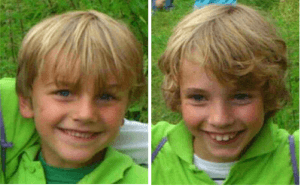 Ruben and Julian van der Schuit have been missing since the 6th of May 2013 around 8.15 p.m. The last time they were seen, they were accompanied by their father (Jeroen Denis), who has been found dead in the forest nearby Doorn, Netherlands. It is believed by police that their father committed suicide.

The children have not been found. The hope is that they are still alive and police can locate them safely as soon as possible

Through an international network of law enforcement professionals and dedicated community volunteers facilitated by Crime Stoppers International, Dutch police officers using social media @HenkTwit and @GreetSacri have collaborated with Crime Stoppers International to get this information translated into English and posted here. It is hoped that the info can be shared from this wordpress site in the English language wherever there may be a way to find the children safely.

Description of the children:
Ruben is a quite skinny boy has dark blond hair, a scar in his right eyebrow. On the day of disappearing he was wearing blue jeans, a black Oli brand t-shirt and a black vest brand: Mexx.

Julian has a normal posture, freckles in his face, darkblond hair, a scar on his nose. On the day of disappearing he was wearing a brown vest, blue jeans, a camouflage print t-shirt, a black leather coat and black Nike sneakers.

We only have one request, spread this news what might help us in ASAP finding Julian and Ruben!