Police Associations “Social Media To Protect Those Who Protect Others” 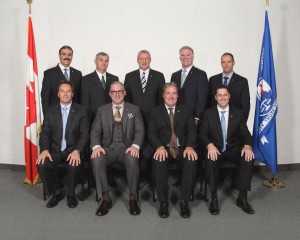 “Living The Dream” is often a response by police officers when they greet colleagues and are asked “How Are You today” The state of now for me in “living the dream” is being a full time social media officer for the Toronto Police Service, an unforeseen turn in walking the beat on the street to walking the beat in the virtual world. The reality is I need those that protect those who protect others to walk the virtual beat with me!

On Tuesday March 26, 2013 I was honoured to spend a day of my current “parental leave” (aka “Living The Real Dream”), talking with great people from the administration staff at Toronto Police Association . Ironically, this meeting was a day before the “not criminally responsible” verdict in the murder trial of Richard Kachkar, a man charged with murder after a Toronto Police officer, my friend Sergeant Ryan Russell died in the line of duty 2 years ago.

Since Mike McCormack became president of the Toronto Police Association, I, in my capacity as a TPA member, along with my role at Toronto Police Service Corporate Communications as a social media officer, have been in dialogue with Mike and his colleagues on the TPA Board of Directors about the need to use social media effectively for Association business. To the credit of Mike and his Board of Directors, they have been listening, and we have been collaborating back and forth for some time now using the Toronto Police Association twitter account and TPA facebook page.

I think it is clear to all that the time has come for an official policy, strategy, and human resource allocation to this important issue, as there are now over 350 Toronto Police officers using social media official for Toronto Police Service business. There are major issues that face our officers each and every day, especially the pending jury verdict of Ryan’s trial, which as it turned out, was announced less than 24 hours after our meeting. Click here to see the Epilogger event created to crowdsource what was being said in social media during and after the trial. It is most interesting to see who is saying what, when and how in social media. One lesson for me in watching this crowd source is that traditional media is not dead, and that in this case it was traditional media driving the social media, as the top tweeters were predominantly all traditional media personalities.

Our meeting was over 2 hours long, and I felt that the staffers really did see the need to both listening and posting info using social media to effect the TPA’s mandate in our fast paced world. We talked a lot about using Hangouts On Air for official business of the Toronto Police Association and many other possibilities of communication strategies going forward.

We also discussed setting up a WordPress blog (like example of Canadian Police & Peace Officers Memorial), Twitter, Facebook profile and page, Google Plus profile and page, Youtube account, Hootsuite account, as well as having a monitoring tool and social media communications strategy that compliments the traditional communications strategy. Last but not least, we discussed the need to assign a human being or human beings from the staff to monitor, post and respond to official Toronto Police Association social media. I really want to express my sincere thanks to all the great staff who made this meeting truly work and be totally worthwhile.

We did this blog post with a bare minimum of information and posted it to demonstrate how quickly and effectively blogging, and using social media tools can be for the staff members and the Board of Directors. I left feeling that we were truly going forward on the right page. I came home and started putting some content into place on this blog that can help not only our Toronto Police Association but other Police Associations who find themselves in similar situations of wondering what to do with social media.

An example of using video is a great video from the Canadian Police Association Annual General Meeting in Quebec City in 2012 of the presentation of Danish Police Union International Secretary
Claus Redder Madsen about what the possibilites are to effectively communicate the message of daily police association (union) business to the membership and the public. I was fortunate enough to be invited to speak at that event, and asked the Danish guest if he would be ok with live streaming his message, and he agreed.

All that was involved with this presentation of a keynote speaker was to start up a Google Plus Hangout On Air, invite in either the public or key people who want to be present but couldn’t be there, and hit the start button. Afterwards, the video is available to be shared with the membership and the public around the world on Youtube. In this hangout you will see Jeff Brown from Truro, Nova Scotia has joined as well as Rob Cairns from Toronto. Both are community members who are supporters of the police and are power users/trainers in social media who both want to help us do our jobs better. What is the harm of some supportive citizen journalists helping the police celebrate the good instead of the traditional media celebrating all the bad? It is my humble opinion that we need to tap into these community resources now more than ever!..

As you can well imagine, this process needs a clear strategy with everyone engaged. Thinking in terms of purpose, and process leads to payoff of potential is a great start.So as my mentor and friend Mike Downes in UK says.. “Let’s get crackin'” Mike assisted in another national event to capture a presentation in Ottawa in 2012. The issue of police alleged to lie in court is near and dear to my heart, as I feel that if one officer is found to be negligent in their duties, that the traditional media make it into such a huge deal that all the great work of the rest of us is forever tarnished, and that leads to mistrust in police, and ultimately effects social media.

The potential of social media to help police associations around the world as a tool to protect those who protect others is great. Looking forward to collaboratively making a difference. As you can see from the Ryan Russell trial tweeters, traditional media is having a large say in the traditional and the social world these days. We need to celebrate the positive of what we do every day using social media tools so that the public knows us, understands us and support us. We can do this!