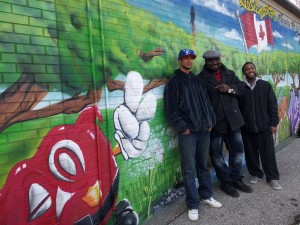 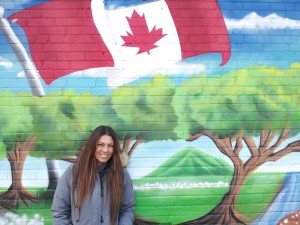 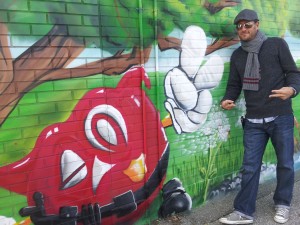 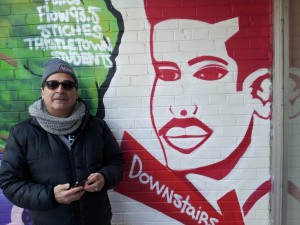 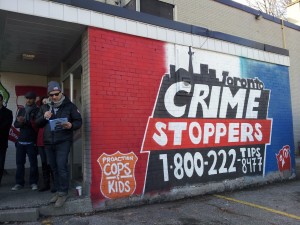 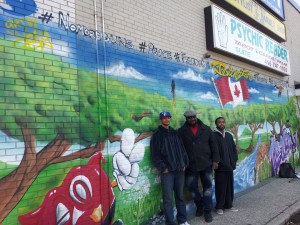 Click here for Google Plus Event with many more photos from the graffiti art mural reveal.

Magic Finger Wong has completed a graffiti art mural for the kids and our future at the Mac’s Convenience Store located at 2428 Islington Av, Toronto Ontario Canada (at corner of Elmhurst Av and Islington Av) before he hits the road with his graffiti art show in January 2013 in Montreal, Halifax and Quebec.

Watch the entire unveiling ceremony below. The event was live streamed using Google Plus HangoutsOnAir to Youtube.

Sean Sportun, of Mac’s Convenience Store and a Toronto Crime Stoppers Board Member had the idea for the mural after a twitter hash tag #NoMoreGuns went viral after the Danzig Street and Eaton Centre shootings in 2012 in Toronto. Sean stated “We need to engage our youth in positive activities on a regular basis, and Crime Stoppers is part of the solution to prevent violence and illegal guns. I had seen other community members and police officers working together on the graffiti art theme for community building and I thought that it was a great way to build community, promote the success of the graffiti artists, and create awareness for peace, freedom, community safety and the future of our young people”

23 Division Staff Sergeant Kim Scanlan stated that she was approached by Sean about the idea and thought that it fit in very well with the Neighbourhood Toronto Anti-Violence Intervention Strategy Initiative (known in policing circles as the “TAVIS NTI” that they were involved with throughout 2012 for bridging the gap between youth and the community. Crime Prevention officer Constable Ryan Wilmer stated “Having youth come out to see this mural at the launch today celebrates and furthers what we already had Wong engaged over the summer with Wong painting graffiti art on our police station in Rexdale.

The project was funded jointly by the TAVIS NTI, Mac’s Convenience, Toronto Crime Stoppers and ProAction Cops and Kids. 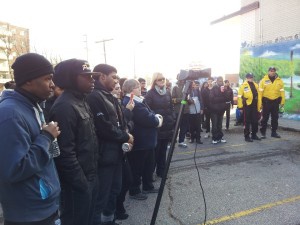 Elmhurst Public School students attended the unveiling of the Thistletown / Islington Mural at @MyMacs December 14, 2012 in Toronto Ontario Canada For Success And Safety 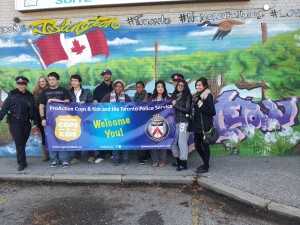 It takes a community to create success and safety together. Thanks Everyone!

Thistletown Community Street Mural Project serves a strong purpose to develop an
appreciation for neighbourhood graffiti beautification and promote positive initiatives in priority
neighbourhoods.
JJ and Melanie from Flow 93.5 FM will be taking part in the reveal of the Thistletown
Community Street Mural Project, along with the mural’s primary artist, “Wong” from Soul
Image.