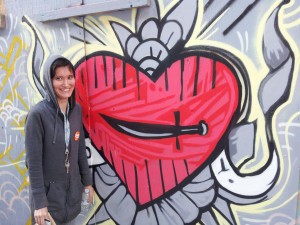 Editor’s Note (Scott): Nadia has asked me repeatedly not to publish this ‘as is’ because she feels she can do ‘better’. She has finally said it is ok to publish ‘as is’ .. The dialogue that Nadia and I are currently having on twitter will elevate the quality of work to the next level on the next guest blog project! … Stay tuned!

On Sunday October 21, 2012, Scott Mills of Toronto Police Service invited me to participate in a Cross Fit Graffiti Art Program and work out afterwards.

I agreed to attend, because I had no plans and was in need of a distraction.

We set all of this up with the awesome world of technology, and social media site Twitter (@auntienadia @GraffitiBMXCop) and our two visions collided.

I am not the traveler and new areas tend to cause me great anxiety so imagine my reaction on Sunday when I was trying to locate Scott!! We finally met on the street and headed to the alleyway.

When I first glanced around to get a feel of what I was getting into, I was in awe at what I was seeing.

When Scott explained the vision of the program I was instantly inspired. For me that showed that people want to make a difference which I had never been exposed to before. It was very refreshing.

The other participants were friendly and there was a genuine respect for everyone, what was going on, and only had making a difference creatively on the mind.

For me, it was just so priceless watching them go to work on the sides of buildings for which they had received permission to use to create, which also showed me that once the vision was explained, property owners couldn’t refuse because at least the youth were occupied in a positive way.

These youth were at one point in trouble for doing this very thing that now they were doing alongside a Toronto Police officer!!

Seeing a Police officer interact and give the youth back something they loved despite being in trouble for doing so before showed me that the police are willing to work with people to change the circumstances of arrests where needed and deemed acceptable (no I don’t think a cop will stand by someone robbing a bank or assaulting someone, so not even worth trying folks!!)