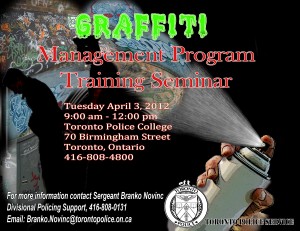 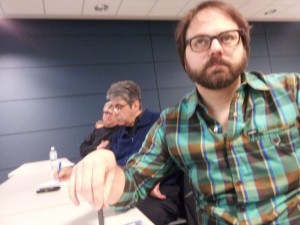 Thank you to Sergeant Branko Novinc, Staff Sergeant Steve Pipe of the Divisional Policing Support Unit , Jodi Callan and Kristina Hausmanis of city of Toronto Graffiti Management Plan , Steve Ferrara of community building art specialists Well And Good and all the police officers, by-law officers and city staffers who attended the training session for the new Graffiti Management Programs for both Toronto Police Service and the city of Toronto at the Toronto Police College on Tuesday April 3, 2012.

In one simple thought, I can honestly say that we have made huge progress in what matters for both property owners, stakeholders and the graffiti arts community. There is no doubt that everyone wants to stop graffiti vandalism. The positive part of this seminar was that a distinction was made between graffiti vandalism and graffiti art, and not just in words. The Toronto Police Service’s Graffiti Eradication Program was renamed to the Graffiti Management Program. The original program started by now Staff Inspector Heinz Kuck had a great foundation and was a balanced program. Heinz worked tirelessly and often alone to collect and document the facts, engage community stakeholders, and was accepting of graffiti art projects. The challenge was that by the name of the program alone, the graffiti community were turned away. The word ‘eradication’ did not sit well with community building graffiti artists like Kedre Browne and Jessey Pacho, two of the artists who I believe are now pillars of the community making a difference, not vandalizing community.

Leaving the seminar, a police officer working in the Rexdale area of Toronto in attendance, approached me and told me that he was a graffiti artist and wanted to get involved with our new program to help kids and the community. He did not want his photo taken or posted here, or his name used. This might have something to do with the fact that an accomplished crime prevention police officer in attendance flat out and passionately stated to the room that the approach of community building and graffiti would not work. He stated this despite the fact Officer Scott Mills along with graffiti community spokesperson Steve Ferrara cited example after example of youth being helped by working together with cops and kids on the graffiti issue, and that videos and social media of cops and kids working together on graffiti themed projects have gone viral worldwide with a positive message of trust, success and community safety. See graffiti artists Kedre Browne and Jessey Pacho in New York City at the State of NOW #140Conf in a talk called Twitter, Graffiti Art And The Police in June, 2011 by Clicking on Webdoc embedded on a facebook page

To see youtube video with over 3/4 million views since 2007 of Staff Inspector Bryce Evans, now head of the Toronto Police Service Financial Crimes Unit painting a BMX Bike Ramp that was part of the 2007 Grey Cup Argos Foundation BMX Youth Engagement Project at an event known as Style in Progress in the Parkdale area of Toronto. It is videos like these that I credit with helping to build trust and relationships between cops and the community that lead to helping to stop, prevent and solve crimes together.

It is not an accident that in two years of engaging in community building projects and celebrating them in social media our anonymous Crime Stoppers tips in Toronto tripled from 300 per month to 1000 per month. The good part is the tips are getting guns off our streets, and we are looking at spray cans as more of a positive, and not a negative! The vision of the policy document titled “Youth In Neighbourhoods: A Positive Approach To Graffiti Management” in the Ontario School Resource Officers Training Manual is slowly coming into action on a sustainable basis in Toronto.

The bottom line for me is that this training day paved the way for other police officers to build community and trust on the graffiti theme using a relationships and technology strategy.

It is exciting that Constable Isabelle Cotton and Constable Jennifer Sidhu , officers who will be working hands on with our community members like Steve and Lisa Martin at Well and Good, Leyla Bulcan at Community CAVE and Judith Snow at Laser Eagles, Karin Eaton at Mural Routes and the entire graffiti community are all newly trained in using social media for communications as a result of the Toronto Police Service Social Media Initiative.

The good news is that we are communicating more efficiently than ever before. The vision of Heinz Kuck, Janna Van Hoof and many more people on the cop side and on the graffiti community side of the graffiti debate are really the same. Peace Love and Community is what everyone is all about. I have much praise, admiration and respect for people like Heinz on the cop side of things and Janna on the graffiti community side of things. A special mention needs to go to Mike Young from Ottawa who tirelessly worked behind the scenes over the years to build the bridge that we are now seeing.

We now now have a term to describe our programming that that is positive and good, and will go a long way to reducing graffiti vandalism and increasing opportunities for our property owners and our arts community. A key person assigned to the graffiti portfolio at the city of Toronto David Twaddle is now talking to a key child physician about truly helping youth experiencing autism, aspergers syndrome and attention deficit disorder through engaging youth in a positive way on a graffiti art and community building theme. Healthy Relationsihps = Healthy Community. Amen.

Watch archived UStream videos of all the presentations at this event here: