Thank you to Paisley Rae http://Twitter.com/PaisleyRae , a concerned and caring community member for making this appeal possible today.

Inquiries can be directed to Scott Mills Cell 647-449-2801 | E-Mail: scotmills@gmail.com – Media inquiries are welcome – Add scotmills@gmail.com on LinkedIN or check out http://ConnectedCops.net for full presentation June 8, 2011 by Scott Mills, Social Media Adviser to IT Committee of Crime Stoppers International in conjunction with Michael Gordon-Gibson, President of Crime Stoppers International at the 2011 Toronto Police Service Fugitive Investigators Conference in Toronto, ON Canada 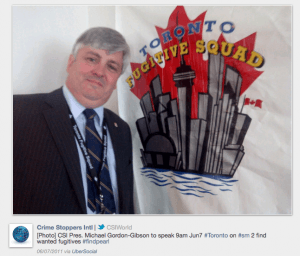 The following videos are being presented at the conference this morning. They are social
media appeals. The public and the media are asked to share the videos in their social media.
Michael Gordon Gibson is available to speak to the media, as well as the father of the missing
child, Henry da Massa; the creator of the local Toronto videos, Parkdale community member
Paisley Rae; and the officer in charge of the case, Detective Rick Mooney of the Toronto
Police Fugitive Squad

To arrange an interview please contact Constable Scott Mills at 647−449−2801 or e−mail:
scott.mills@torontoPolice.on.ca

The social media pages for this case are:
http://facebook.com/MissingPearl

Please help by sharing this video into your social media and by
‘liking’ CSIWorld on Facebook, following @CSIWorld on Twitter and
subscribing to CSIWorld on Youtube.

Helen Gavaghan, the biological mother of Pearl, is a wanted fugitive.
Please contact police or Crime Stoppers if you have any information.
A full chronology of the case is listed here: http://MissingPearl.org

The purpose of this video is two fold – for social media training, and
for an appeal for information to locate a missing child and a wanted
fugitive.

The video includes an introduction by Scott Mills, followed by Henry
daMassa , the father of a missing, abducted 7yr old girl named Pearl
Gavaghan speaking about how he is using social media to try to locate
his missing daughter.

If you have information on the whereabouts of Helen or Pearl call the
police in your area.

Anonymous tips can be submitted to Crime Stoppers

Anonymous tips can be submitted to Crime Stoppers in the following ways:

Thank you to Paisley Rae, Toronto community member in the Parkdale
area, very close to where Pearl and Helen were last seen for filming
and editing this video.