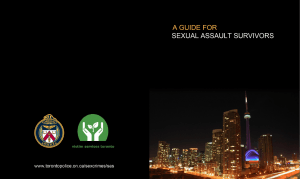 Sex Without Consent Is Sexual Assault "Don't Be That Guy"

“Not Saying No, Isn’t Saying Yes” Sexual Assault Is A Crime

A Guide for Sexual Assault Survivors

The public education campaign uses posters from the Sexual Assault Voices of Edmonton program, a campaign launched in November 2010 in partnership with the Edmonton Police Service. In addition, the Toronto Police Service has created awareness pieces that address issues of victim blaming and various sexual assault myths.

“Sexual assault is a violent crime that is based on power and control. Anyone who commits a sexual assault needs to know the Toronto Police Service takes these crimes very seriously and their actions will not be tolerated,” said Chief William Blair. “I would encourage anyone who has been sexually assaulted to speak with the police and to access the various community agencies that do an excellent job of providing support to survivors.”

For many years, the Toronto Police Service has successfully collaborated with many community agencies and representatives to provide a systematic response to sexual assault.

“The legal system can be intimidating, and for anyone who is a survivor of sexual assault, whether the assault occurred recently or in the past, it can be a confusing and scary time.

Our goal with this guidebook is to educate survivors and give them a reference manual that can help them through the legal process and let them know what their options are and what resources are available to them,” said Simona Jellinek, lawyer with Jellinek Law Office and member of the Sexual Assault Advisory Committee.

The Toronto Police Service intends to distribute the public education campaign through social media and on its website. It will be displayed at the Toronto Eaton Centre’s Community Booth on May 19, 2011. The guide for sexual assault survivors will be distributed to every police division across the city and will be made available to any community agency and educational institution that requests it. It will also be available at the Community Booth on May 19th , on
the service’s website and through various social media channels.